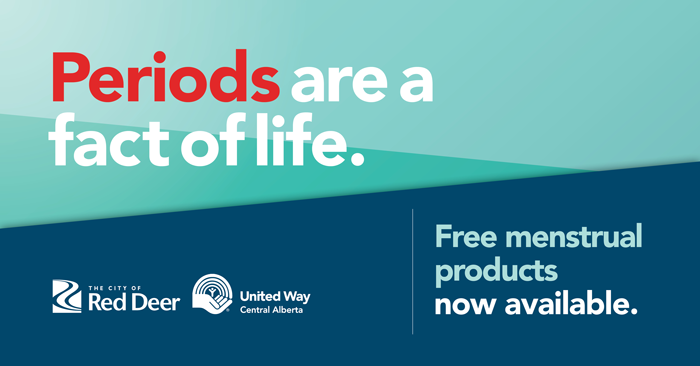 With the goal of ending period poverty, the Period Promise was started by the United Way of Lower Mainland in British Columbia. Through research, they found that nearly 1 in 4 Canadians who menstruate say they have struggled to afford menstrual products for themselves or their children. Since then, Period Promise has expanded to other United Way locations, including United Way of Central Alberta.

To learn more about the Period Promise, visit https://www.periodpromise.ca/

The City of Red Deer has signed the Period Promise Policy Agreement with the United Way. This signals our commitment to providing stigma-free access to free menstrual products to employees, guests, clients and the general public.

In support of this, The City of Red Deer launched a pilot program to provide free menstrual products in three City facilities - Collicutt Centre, G.H. Dawe Community Centre and City Hall. These facilities were chosen to ensure there is a diversity in the type of users accessing the program as well as varied geographic locations across the city.

In June 2022, product dispensers were installed in all washrooms and change rooms in these facilities – women’s, men’s and gender-neutral facilities. Providing products in all washrooms provides greater access to products and helps to reduce the stigma around periods. Products can also be taken for friends or family.